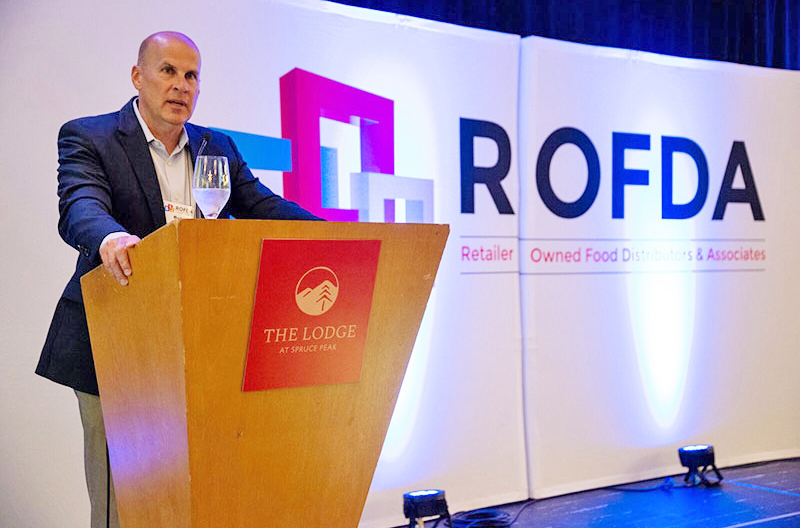 Bob Obray calls himself an accountant. The SVP and CFO at Associated Foods Stores (AFS) in Salt Lake City also is a student of (other) successful people in business. He shared some of the lessons he’s learned from what they’ve had to say with those attending ROFDA’s Spring Conference in Stowe, Vermont, in May.

He first referenced David Foster Wallace’s 2005 commencement address at Kenyon College as being one of the “most influential things I’ve read in my studies.” Obray shared the story that opened the commencement speech:

“There are these two young fish swimming along and they happen to meet an older fish swimming the other way, who nods at them and says ‘Morning, boys. How’s the water?’ And the two young fish swim on for a bit, and then eventually one of them looks over at the other and goes, ‘What the hell is water?’” Wallace’s point was “merely that the most obvious, important realities are often the ones that are hardest to see and talk about.”

Obray said it comes down to awareness.

“Our natural default setting is to be ‘deeply and literally self-centered and to see and interpret everything through this lens of self,’” Obray said, quoting Wallace. “Our challenge is to adjust the natural default setting. This concept applies to us personally but also as teams, as groups, as organizations.”

Obray also shared Alan Mulally’s Business Plan Review concept. Mulally, who Obray said was a mentor of his, once was CEO of Boeing Commercial Airplanes and later became EVP of Boeing. He also was president and CEO of the Ford Motor Co. from September 2006 until July 2014.

Mulally joined Ford at a time when it was very siloed, kingdom-like and broken, Obray said. Mulally set out to make the environment and culture more collaborative and team-oriented. He introduced the Business Plan Review.

“It’s very simple, but in my opinion it’s phenomenal,” Obray said. “Essentially, they met once a week in these Business Plan Reviews and Alan would say that ‘we have sometimes upwards of 320 charts’ that would depict where they were in relation to their strategy and their plans.”

It was a simple concept: red light (stopped, broken, not getting anywhere), yellow light and green light (on task, on track).

At the first Business Plan Review, all of the charts were green. Mulally told the group that the company was projected to lose $17 billion that year and asked, “Is everything really green?”

They were afraid to admit there were things that needed to be changed, strategies that need to be adjusted, Obray said.

A few weeks into the Business Plan Review sessions, Mark Fields, who had been passed over for Mulally’s top job at Ford, came in with a “red light” chart. A new car was about to be produced, but there was a mechanical issue with the liftgate.

“Everybody in the room believes Mark Fields is gone. He’s just admitted, ‘we’ve got a problem.’ He’s out of there,” Obray said. “You know what Alan Mulally did? He applauded Mark Fields.”

Mulally praised Fields for publicizing the issue and inviting others to collaborate to help solve the problem. As a show of support for Fields, he was positioned so that he would sit right next to Mullaly.

After that, more and more non-green-light charts started to show up, and the executives learned to agree with each other and to collaborate, Obray said.

“They learned that the first thing we have to do is be aware of where we are at, and not be afraid to share it,” he said. “And I think that’s a very important message.”

Obray spoke quite a bit about Jeff Bezos, founder of Amazon. He asked ROFDA attendees if they had ever heard of a company named Cadabra (as in abracadabra). That was the first name Bezos gave Amazon. An attorney told him it sounded too much like cadaver. Bezos then chose Amazon because the company launched as the “earth’s biggest bookstore.” The Amazon is the earth’s biggest river.

Amazon’s launch was the beginning of true e-commerce. The company went public in 1997 with a valuation of $438 million, with shares priced at $18. (Its current valuation is approximately $925 billion and has topped $1 trillion; shares of the stock were valued at $1,711 on June 3.)

Bezos introduced in an early letter to shareholders a business philosophy he calls Day 1 and Day 2. He even named the building he then occupied Day 1.

Day 2 is stasis—the opposite of Day 1. In another shareholder letter, Bezos wrote that stasis is “followed by irrelevance. Followed by excruciating, painful decline. Followed by death. And that is why it is always Day 1.”

Day 2 would happen in “extreme slow motion” and “established companies might harvest Day 2 for decades, but the final result would still come,” Bezos wrote.

Obray said there are a significant number of companies exhibiting Day 2 attributes today.

“Now, this is not by any means an indictment of our industry, our companies, our organizations or our groups,” Obray said. “I don’t want to come across as saying we are in Day 2 as an industry or as organizations. Rather I would caution that we need to beware of those attributes of Day 2 as we move along our journey.”

Obray referred again to the automotive industry. General Motors (GM), Fiat Chrysler Automobiles and Ford are the remnants of the “Big Three” U.S. automakers. During the Great Recession, executives from GM, Ford and Chrysler flew in corporate jets to Washington, D.C., to ask for a bailout. Ford was the only major U.S. car manufacturer to avoid a government bailout.

He gave a short list of the companies that have formed since the big three stumbled.

“Tesla’s market evaluation exceeded that of Ford, which was phenomenal,” Obray said. “Tesla produces today on average 340,000 vehicles a year. If you look at Ford’s production, annually, they are at 6 to 7 million vehicles.”

He said Tesla is more valuable than Ford because stock prices are forward-looking.

Ford, GM and Fiat Chrysler now are moving into technology, which Obray said is an absolute necessity to get them out of Day 2 and into Day 1.

In the 2016 letter to shareholders, Bezos went into more detail about the essentials required to stave off Day 2. Obray shared them with ROFDA attendees and related them in terms of the grocery industry.

Bezos dislikes measuring success by substitute or surrogate. Obray said it is dangerous to use market research and customer surveys to understand customers and their needs.

“(Bezos) says surveys are generally based on averages that can match real problems and that’s true. If we are always adapting our strategies to the average, which is what you get on the survey, that’s very bad,” he said. “The best thing we could do is get in the face of our consumers. To sit down with them and ask each consumer point blank, what can we do better? Help us adapt our strategy. Help us chart our course going forward.”

Disney does that well with its “guestology” theory for customer experience. The best information comes directly from guests in the company’s parks and other venues. Disney’s goal is to make the guests feel special.

Obray said AFS is introducing reviews with its members.

“We actually ask them point blank,” he said. “We do surveys, we do a retail survey, we do team member surveys, but the best information you can get is directly from the people.”

Obray said that companies sometimes do not embrace external trends quickly enough because they believe they have it all figured out.

“We have to be aware of what’s happening all around us. The outside world can push you into Day 2 if you won’t or can’t embrace powerful trends quickly,” Obray said.

In 2009, AFS bought 34 stores from Albertsons. One of the first things AFS did was to kill the loyalty program. It even publicized the move.

“In all due respect, it could have been because we didn’t have the ability to roll out the loyalty program more broadly to all of our stores,” he said. “And loyalty is absolutely essential in today’s world. We didn’t embrace that trend.”

He said Kroger has made itself the “king of data” with its 84.51° partnership and the personalization that gave the grocery company an advantage.

AFS also failed to embrace self-checkout. That is a mistake it has rectified because “the consumer today wants a frictionless transaction. They don’t want to wait in the check line. They want to go as quickly as possible through the lane. We have to embrace those trends,” Obray said.

“In our segment of the industry, the independent grocers, we’ve got to invest much more in technology,” he added. “That’s hard because there is not a lot of capital out there to spend, but we’ve got to dedicate more resources to technology if we are going to stay relevant and outside of Day 2. I promise you that.”

Startups are agile. Obray said independent grocers talk about being agile but can be a little slow to make decisions.

“We are trying to appease all of our members in a lot of cases,” Obray said. “We have to be quicker, more responsive.”

“We are never going to have absolute certainty when we make a decision,” Obray said. “Sometimes we have to take a little bit of a gamble.”

“The absolute best thing we can do is obsess over consumers,” Obray said. “If you look back at the grocery industry—I’m going to say decades and decades—you go into the general store and the store manager/owner knew the consumer. He knew what Mrs. Jones cooked. He could point her to new products. He could do a lot of things because he knew the consumer.”

Economies of scale today hinder that level of intimacy without data. Data allows companies to be obsessed with the consumer and to meet their needs.

The desire to delight customers will drive invention on their behalf.

On this point, Bezos introduces the “customers are always beautifully, wonderfully dissatisfied, even when they report being happy and business is great” concept. Bezos also discusses “divinely discontent” consumers who never will be fully content.

“If we ever think it’s going to be enough, we are fooling ourselves. We have to constantly be inventing and anticipating the needs and the changes in consumer demand,” Obray said. “Stasis is death.”